Nagaland has a rich diversity of ethnic groups, languages, religions, climates and landscapes. The land is home to some 16 different kinds of tribes with distinct and fascinating cultures. More than 80% of the population lives in small, isolated villages and practice their own rituals and traditions which have been existing since centuries. The Nagas, inhabitants of Nagaland, are said to belong to the Indo-mongoloid stock, a race whose presence was first noted ten centuries before Christ, at the time of the compilation of the Vedas. The Nagas are mostly Christians and fluent in English. 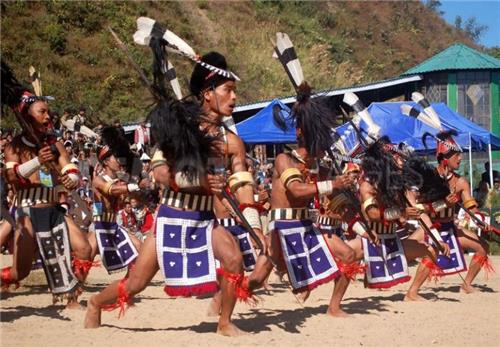 Nagaland is a land of unique culture and traditions. Nagaland is known for its exquisite bamboo and cane products, weaving and wood carving. The most important works of art and crafts exist in the form of Basketry, Weaving, Woodcarving, Pottery, Metal work, Jewellery and Beadwork.

Dance and music are essential parts of Nagaland’s culture. Many tribes and race live in Nagaland together and as such there are different traditional dances and music in the state. The music of Nagaland is characterized by folk songs and music accentuated by traditional instruments.

Nagaland is famous for its numerous seasonal fairs and festivals. All the tribes celebrate their own distinct festivals with dance and music. The most important festivals celebrated in the state include Sekrenyi, Moatsu Mong, Suhkruhnye, Bushu, Yemshe, Metumniu among others.


Art and crafts in Nagaland:

Nagaland is a land of unique culture and traditions. Nagaland is known for its exquisite bamboo and cane products, weaving and wood carving. The people of Nagaland have special skill of crafting and making 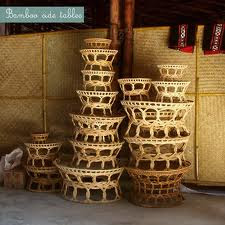 
Style of the Nagas:

The art and craft of Nagaland has a uniqueness of its own. They are very intricately made and beautiful to look at. Tourists coming to this northeastern part is mesmerized to see the sheer wonder of art and craft of Nagaland. The abundance of bamboo makes it possible for the artists to make the bamboo and cane products. The tribes of Nagaland are apt in making different kinds of cane and bamboo products and in weaving. These products have now received recognition not only in the national market but also in the international market and are much in demand.

Cane and bamboo product making is one of the prime occupations of the tribal of Nagaland. Cane and bamboo products like different household items, furniture, accessories and musical instruments like Naga flute are made by the people. The significant items of cane and bamboo are baskets, mats, hats, headgear, trays, bowl mug, container, fans, bamboo pipes, chairs, utensils, knives and many more.

Basket making is an important feature of the Naga people. The cane baskets of Khonoma village are particularly well known for their intricate weaves.

Weaving is an ancient craft of the tribal of Nagaland. The Naga women weave colourful shawls, bags and jackets. The art of weaving is mostly popular amongst the female in Nagaland. 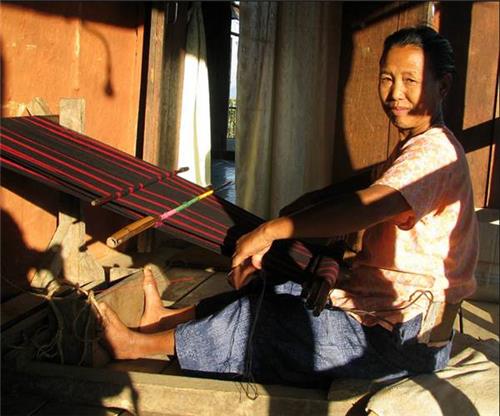 The Nagas are known for making things out of woodcarving. Things such as the decorations on the village gates and houses and the things of utility such as wooden dishes are made by the Nagas. The Shangnyu village of the Mon district is one of the finest specimen of the Naga woodcarving. Diezephe Craft village in Dimapur district is an example of craft concentrated village where a major source of the income of the village comes from craft.

Pottery making in Nagaland is another work mostly done by the womenfolk. Tseminyu and Ungma village are known for pottery works. 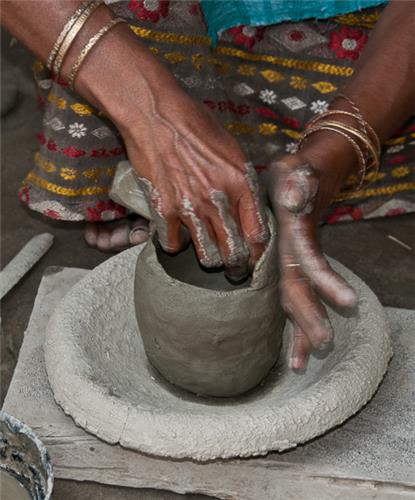 The tribes of Nagaland have distinct jewellery and costumes of their own. Iron tin and brass are used for making ornaments. Jewellery and bead work are famous with the craftsmen. The Nagas are skilled in making different ornaments including neckbands, armlets, bracelets, bangles which are intricate in design.

The Naga women also make the attires for the family. Naga shawls like Tiongkong su, Tabensa su, Lungkhum subang, Keyi su among the many others are the characteristic cloths of the Naga people. 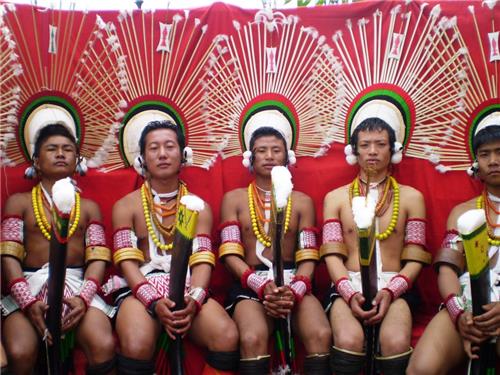 Nagaland is located in the farthest Northeastern part of India. The food of Nagaland is rich in its own ways. Pork meat is widely consumed in Nagaland. Pork meat with bamboo shoot is the most common Naga dish.

Nagaland is a land of various tribes and therefore the cooking methods differ among the different tribal communities. The cuisine of Nagaland varies from vegetarian to non vegetarian. The food is mostly boiled and not fried. The food of Nagaland comprises mostly of meat and fish cooked by the processes of smoking, drying and fermenting. One of the most important aspect of food of Nagaland is the variety of pork. Pork meat with bamboo shoot is the most common dish in Naga delicacy. The Naga also have dog meat as their food.

The Nagas use a variety of local herb in the preparation of the food. The Naga foods are spicy with the addition of different types of chilies. The chilly in Nagaland is famous for its spicy taste. The ginger used in Naga foods is also different from the common ginger in terms of its aroma and spiciness.

The typical Naga food course consists of a meat dish, a boiled vegetable dish, rice and a chutney called Tathu. The Nagas have boiled edible organic leaves. Some of the dishes of the Naga people are fermented bamboo shoot savored with fish and meat, Axone (soya bean boiled and fermented or smoked and sun dried) relished with smoked pork and beef. They also have Anishis fermented yam leaves which are made to patties and smoked or sun dried. Kelhe/ Naga pork is made of pork meat with bamboo shoot and Raja chilli. Vunenuo or special strew chicken is a chicken variety. Ga or mix veg stem is a variety of vegetarian dish. Naga curry made with crushed potato and tomato is also a fine Naga delicacy.

Dance and Music in Nagaland:

Dance and music are essential parts of Nagaland’s culture. Many tribes and race live in Nagaland together and as such there are different traditional dances and music in the state. The music of Nagaland is characterized by folk songs and music accentuated by traditional instruments. 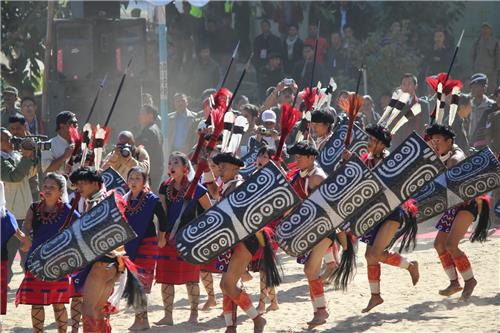 Music is also accompanied with the dance. The themes of the music and songs are many. They may glorify a tradition, praise a specific act of heroism, narrate an important event of the recent past or relate to a love story. The music of Nagaland is basically folk in nature. The folk song narrate stories relating to romance, history, incidents and bravery. The most popular songs of the tribes are : Heliamleu or dancing songs, Hereileu or war songs, Neuleu or legendry songs Hekialeu or songs about self. Two distinct genres of music namely the choral/church/Christian type commonly known as gospel music and the rock/pop genre commonly known as secular music exist in Nagaland. In the music of Nagaland could be found traces of Western music with many rock bands from this part of the country taking part in rock concerts.


Musical Instruments used by the Nagas:

In accordance with the tribal festivals, festivals like New Year, Christmas, Valentine's Day and all the important festivals are celebrated in Nagaland.

Hornbill International Rock Contest is an international level rock contest and is also the longest music festival in the country. It is a seven day long festival. The festival is held at Kohima. And the participants include the rock band from the state. The festival is marked by feasts, dance, music and games. The celebrations coincide with agricultural lean products such as after harvest and as such the festival is fun filled and full of gaiety. 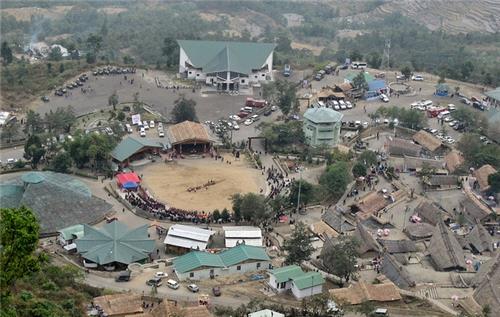 To know about the Hornbill Festival better, watch this video.

The tribal communities of Ao tribe celebrates Moatsu Festival in the first week of May every year. The festival is celebrated after the sowing of seed is done.

Amongmong Festival is mainly celebrated by the Sangtam tribe in Nagaland. The festival is celebrated at the time of harvesting new crops in the field.

Tokhu Emong Festival is mainly celebrated by the Lotha tribe in Nagaland. The festival is celebrated post harvesting.

Nagaland – one of the seven north-eastern states is a land with an ancient history of tribes. Known as the land of the tribes, Nagaland still accommodates a large number of tribes counting to as much as 66 in number which has been residing in this state since olden times. The hospitality and kindness of the Naga people are tales which are known to people since olden times. Even today Nagaland is a place where, a maximum percentage of the people are ignorant of electronic and technical stuffs. 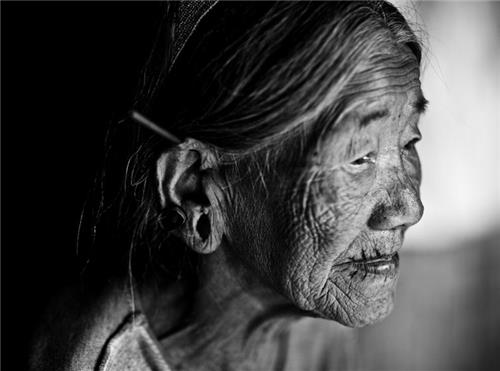 Since English is the official language of the people here in Nagaland, it is no hard task for tourists visiting the place to communicate easily with the people as well. The oddity of this place is that each Naga tribe has its own trait which are all distinct from each other. Such is the authenticity and uniqueness of the tribes of the nagas that “every tribe could virtually be a nation in itself” as once a Naga author had quoted.

A person visiting Nagaland would first notice the tribal culture itself for it is its distinct characteristic. The number of naga tribes in Nagaland include Angami, Rengma, Memei, Maramei, Zeliangrong, Kuki, Chakhesang, Pochury, Ao, Konyak, Phom, Khiamngan, Chang, Yimchunger, Sangtam, Lotha, Sumi and Rongmei. About two-thirds of the Naga tribe are Christians who were converted during the 1800s owing to the influential presence of the Baptist missionaries during that period.


Customs of the Naga Tribes:

The tribes of Nagaland follow customs and rituals which have been in vogue since time immemorial. Headhunting, is a rather creepy custom followed by the Naga tribes. In this custom it is seen that the warring tribes would use the heads of their enemies in the different types of rituals, especially the ones dealing with fertility. However, during the British rule in the 1900s, this custom was banned. Though, proof of this custom can be witnessed in the megaliths erected in Nagaland every time a head was taken for the rituals.

The Naga tribes surely carry a fascinating story for it is a fusion of legacies of centuries old. Their cultural ancestry and sanctity can be clearly observed from the attires that they drape. One cannot overlook the vivid headdresses and necklaces that they flaunt along with the tattoos which is a mark of their age old wars and noble sacrifices. Nagas being potent and courageous warriors, have stories in immense to be told. Their songs and dance also contain the victories and wars fought way back by their ancestors. 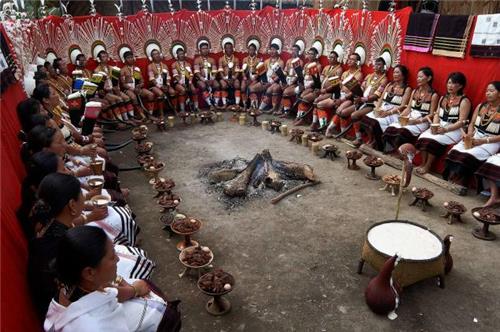 The Naga tribes are a sight of delight for photographers for they give out awesomely superb pictorial outputs. Amalgamation of western culture into these Naga traditions has given its existence even more vibrancy. As the photographers beautifully describe them as “people who goes from living in a near Neolithic stage to the modern 20th century in just a single lifetime.” Visiting north-east India, one should never miss out this state which successfully leaves an enthralling effect on its visitors.